skip to main | skip to sidebar

Re: The Collider, the Particle and a Theory About Fate

The New York Times article entitled "The Collider, the Particle and a Theory About Fate" discusses a theory put forward by scientists at CERN to explain why the Large Hadron Collider seems to be jinxed. Perhaps the sub atomic particle known as the Higgs Boson is so abhorrent to nature that the universe is conspiring to prevent its creation. Below I have set forth my theory as to why a universe destroying particle might appear to be impossible to make. 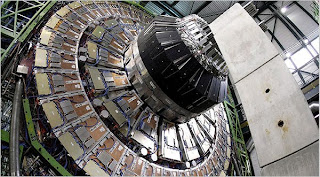 The multiverse theory proposes that, at every juncture in time where a decision is made, reality branches out into parallel universes in which each of the various possibilities are played out. We find ourselves in the one which is the result of the influence of our choice or chance, hence ( the illusion of ) free will.

If it is possible to create a particle which will destroy the universe, it makes sense to me that the process of destruction will not be like a regular explosion which expands outward through time and space, as this would be acting within the confines of the universe as we know it, and would merely be the destruction of structures within the universe, not of the space/time continuum itself.

I think such a cosmic collapse would, by necessity, implode backward through time causing the universe to cease to exist from the beginning. This would eliminate that particular multiverse back to the moment of it's inevitable destruction, leaving only multiverses in which events had conspired to prevent the creation of the doomsday particle.

The resultant perception would be that every attempt to initiate the particle would be foiled by some random event. I suppose that the harder they try to create the particle the more absurd and unlikely will be the set-backs. Or perhaps as each set-back is overcome then each subsequent attempt to start up the Collider will cause the project (and our universe) to be "set back" to the next most likely preventative event, in reverse chronological order, all the way back eventually to the untimely death of Higgs himself.

My hope is that research on the LHC will reveal the end of time, in the sense of a theoretical proof of the nonexistence of time. Or perhaps the non-uni-directionality of time.

Subsequent technological applications of the science in quantum computing will bring us, not time travel, but at least trans-temporal communication and computation. That will be enough to make everything we know meaningless; a Kurtzweilian (or Kurt Vonnegutian) singularity.

So now (armed with the above Higgs Boson Fate theory) if it the temporal singularity doesn't happen I can explain that it did occur in another parallel universe which we are prevented from experiencing; not by an overly patronizing intelligent designer who manipulates our fate by choosing which of the multiverses we can inhabit, but by a self regulating property of reality itself. ;o)
Posted by Kao at 9:43 AM 4 comments:

Happy Fathers' Day! Up with Dads and Down with the Patriarchy!

It's time for Fathers of conscience to rise up against the Patriarchy. Stand by your wives and children, and oppose The Man.

Down with the Deadbeats: from the Abrahamic Uber-Dads in Tehran who hide behind their beards and their riot squads, and the lacy palace Eunuchs of Rome who dictate how we may love, to the Born Again pyramid schemers who are trying to sell us back our Souls.

Why is the Ur-Father so quick to lay his Son upon the Alter of Sacrifice? 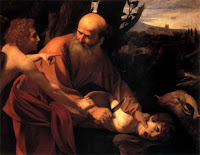 Patriarchy breeds weak men who rule from fear. Afraid to look into the eyes of a Woman or a Gay person for dread of what might be reflected there. Afraid that he will die and his children will live. Afraid his life is based on a Lie, that Love is gone and there is no hope of Joy. Afraid of what his Father will do to him when He gets Home.

Dads, any authority you have is loaned to you by your partners and children, not handed down to you from above. Don't abuse it. Happy Fathers' Day to all and a special group hug for all the Children of Abraham.
Posted by Kao at 9:42 AM 3 comments:

I think Robert Anton Wilson who first said I am, in general, agnostic; but as pertains to "God" I am decidedly atheist. anyway, I heard it first from Xen Dada Axis (hive).

Abraham was the last, I would tend towards the first, but of course have doubts (see below).

In the shuffle gets lost the meaning of gnosticism.

What does it mean to know?

Think I have faith in knowing, but I don't put too much credence in believing.
Posted by Kao at 3:36 PM 3 comments:

Kao
As the world becomes more complex it becomes increasingly difficult to predict what will happen next. This can be disconcerting to people who are raised to expect "order and good government". In fact this "new world (dis)order" is closer in its behavior to natural systems such as biosphere than it is to the orderly machinations we associate with civilization. A study of this kind of chaos reveals it to be the manifestation of a higher order. Although culturally bogged down in linear thinking left over from the now outdated Newtonian "Enlightenment", science, the arts, even religion can provide us with the tools to understand, and benefit from this emerging order. I believe that to adhere to unchanging linear models is to have a fossilized mind. To avoid extinction we must be prepared to co-evolve with our technologies. This site is dedicated to that process. Your comments and observations are welcome on the blog. As a first principle I recognize that no paradigm can claim the ultimate ontology and so we will abide by physicist/philosopher David Bohm's principles of "scientific irony". By this I mean that there is no one truth and and I take everything with a grain of salt.